Is Your Cryptography Reliable?

Our team specializes in studying real world cryptography implementations to assure their correctness and security.

Why You Want to Hire Our Company Contact Us

It's been over a month since we announced the first beta for our new open source project, CMS Airship. We've been hard at work since then, both at a code level and at a protocol design level, and we're nearing the release of the second beta (in semantic versioning: 0.2.0). Before we continue the next steps, let's take a look at some of the cryptography features currently implemented. (Yes, we're using libsodium. No need to panic.)

Although some of what we cover will be complicated, most of these details will be abstracted away from end users. (Only engineers who want to get their feet wet in our protocol designs and implementations need to know this stuff.)

Let's dive in, shall we?

How CMS Airship Will Store Passwords

In our experience, most peoples' experience with cryptography begins and ends with storing their users' passwords, so that seems a natural starting point for our examination.

Most of the cryptography features in Airship are provided by our libsodium wrapper, Halite. Password storage is no exception here.

Local cryptography keys (including the one used to encrypt passwords) are generated on-demand, from your operating system's CSPRNG, when you first access the CMS Airship installer. If you already uploaded any keys before you first run the installer, those specific keys will not be replaced. Otherwise, everyone's Airship gets its own set of encryption keys.

Security Benefits of this Approach

Let's assume you install a community extension in the future that contains a SQL injection vulnerability that gives an attacker access to your database. For most applications, this means pivoting to filesystem access, which is game over, so let's further assume the webserver and the database are on separate bare-metal servers.

Even if the attacker can obtain access to the encryption key, they still have to attack the Argon2i password hashes.

Some other CMS platforms do as well as Joomla, many others do worse than WordPress. We published an in-depth investigation of the security features of other open source CMS platforms elsewhere. Let's move on.

Goal: When a security update is available for our platform, everyone should have it installed within an hour (unless the user elects to turn updates off or change the frequency).

By having a narrow window of patch-available to patch-installed, we can run our project without relying on lengthy bug embargoes to protect your systems. This in turn allows us multiple benefits:

Naturally, we decided it would be a good idea to also offer this capability to anyone who wants to make and share their own Airship extensions.

There's one complication, however: An automatic update mechanism by itself is not an adequate security mechanism: What happens to everyone's Airship if the update was compromised? 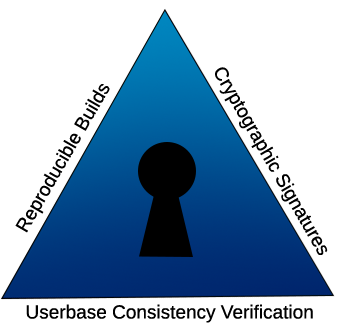 If you recall Defuse Security's Triangle of Secure Code Delivery, there are three properties that a code delivery mechanism must satisfy in order to be secure:

Continuum is our automatic update system which takes care of updating CMS Airship itself, as well as any Cabins, Gadgets, or Motifs installed. Every hour (in the default configuration), Continuum will check the update server for any updates to Airship or any of the types of extensions listed above. If any updates are available, Continuum will:

Update files (and the digital signatures) can come from two places. Most developers will use barge to create, build, sign, and release their CMS Airship extensions. Paragon Initiative Enterprises will use hangar to build and sign updates from an airgapped computer. In both cases, there are two kinds of signing keys used:

All master and signing key-pairs are intended for use with the Ed25519 digital signature algorithm, and are derived (using Argon2i) from a password and 128-bit random salt. Master keys use libsodium's OPSLIMIT_SENSITIVE and MEMLIMIT_SENSITIVE constants; signing keys use OPSLIMIT_MODERATE and MEMLIMIT_MODERATE. (This will probably turn out to be overkill, but unlike password verification, there's no risk of DoS since it has to be triggered locally.)

Strictly speaking, the Ed25519 signature we use is calculated over a keyed 512-bit BLAKE2b hash of the file's contents (with the Ed25519 public key used as the BLAKE2b key) rather than a plain Ed25519 signature. The motivation for this decision was to allow users to sign a large file on a system with very low RAM without sacrificing security. Considering it will take $2^{256}$ hashed messages before the first hash collision occurs (at 50% probability), we consider this acceptable for feeding into a signature algorithm that targets the $2^{128}$ security level.

When you create a new supplier account, the first key you create must be a master key, and is the only key that will be accepted without being signed by an existing master key. You may have as many concurrent master and signing keys as you need.

In short, Continuum takes care of cryptographic signatures by ensuring every update is signed by one of the keys associated with the trusted supplier for that particular update. But how do we know which key to trust?

If I had to summarize Keyggdrasil in one sentence, it would be:

Keyggdrasil makes sure everyone sees the same public keys, prevents anyone from rewriting history, and makes targeted attacks noisy.

At its core, Keyggdrasil is a very humble BLAKE2b-based Merkle tree of every key transaction since its inception. Any time a supplier creates or revokes a key, this is recorded in the channel's copy of Keyggdrasil and propagated throughout the network.

Your Airship will, quite frequently, check for key updates with the update server (dubbed the Channel). Both key creation and key revocation events are recorded (publicly) in this append-only data structure. A simplified overview of the process is:

Or, as an illustration: 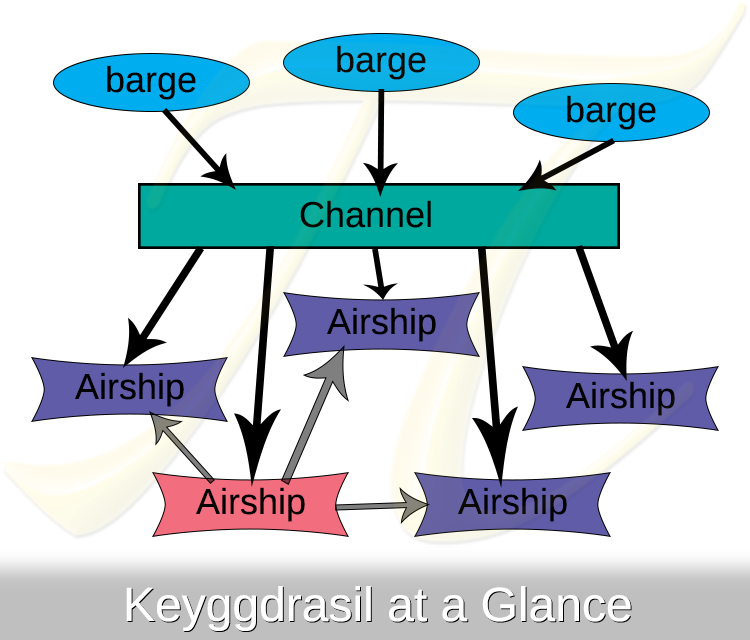 Security Benefits of this Approach

There are a number of small infrastructure attacks that become much more difficult to pull off with the way Keyggdrasil is implemented.

The only way to silently and reliably perform a targeted attack against any one Airship is to:

An attacker capable of pulling off all three would be just as successful attacking one directly. We like to think of this property of herd immunity: In order to compromise the target you want, you effectively have to attack everyone.

As far as we're aware, the only popular CMS that supports automatic updates is WordPress, which does not perform any digital signature verification (and therefore has no need for a system to manage public keys). Thus, if you compromise the WordPress update server, you can compromise 25% of the websites on the Internet. WordPress core developer, Dion Hulse, was investigating solutions for this problem. So far, they haven't been implemented.

Click this link to learn more about the (in)security of WordPress, Drupal, and Joomla.

Our solution for the third leg of the triangle of secure code delivery is to, when applicable, include the git commit hash in the metadata for each digitally signed deliverable (PHP Archive for most cases, ZIP archives for Motifs) and store it in Keyggdrasil. With our previous work (Pharaoh), it should be easy for anyone to rebuild and verify that there are no differences between what was downloaded and what was reproduced.

We aren't automating this process yet. Because of the userbase consistency verification property of Keyggdrasil, if anyone verifies that a package is reproducible from it source code, then everyone enjoys the security guarantees.

Tying it All Together

Consequently, CMS Airship is a solution to the problem of secure code delivery.

Why don't you ensure the userbase consistency of package updates themselves, rather than just the public keys?

The main concern here is disk space usage. Public keys are small (thank you, elliptic curve cryptography), while every version of every Cabin, Gadget, and Motif ever released would quickly become prohibitively huge for most low-end servers to store. We can explore having a separate notary mechanism for Continuum in addition to Keyggdrasil, but right now we feel it's costs far outweighs its benefits.

UPDATE: We now also store metadata about each release (including a BLAKE2b checksum of the deliverable, version identifier, etc.) in Keyggdrasil. This includes core updates.

Why happens if I lose all my keys? Can't Paragon Initiative Enterprises recover my supplier account?

We can do so only by issuing a new CMS Airship core update with an update trigger to revoke all existing keys and create a new master key for a given supplier, bypassing Keyggdrasil in the process. This is the nuclear option and we will not do so without substantial public discussion on the circumstances before and afterwards. Should we fail to do hold a public discussion prior to any emergency key replacement updates: Assume the worst and act accordingly.

What happens if a practical quantum computer is developed?

As soon as we're certain of the benefits (and reliability of the implementations), we will migrate a future version of this protocol to use post-quantum cryptography.

Want to Get Involved?

Secure code delivery is a hard problem, and we intend to make it as easy and painless as possible so our users don't have to worry about it. If you'd like to help, all of our projects are open source on our Github Organization. Feel free to dive in and contribute however you see fit.

If you represent a company wants to use CMS Airship to solve business needs and would like to purchase a commercial license or support contract, please get in touch at your earliest convenience.

If you're facing security problems, big or small, consider hiring our team to perform a code audit or develop innovative and secure solutions.