For context (present and historical): The current version (as of this writing) of the WebAuthn specification lives here, and the most up-to-date version can be found here.

Our security team took an interest to this proposal since WebAuthn would be used in conjunction hardware two-factor authentication devices. Hardware 2FA has proven to be far more resilient against phishing attacks than HOTP or TOTP (meanwhile, SMS-based 2FA is essentially security theater; avoid like the plague).

Despite the importance of WebAuthn to web security for the years to come, our analysis of the standard reveals a lot of concerns that almost any cryptographer should have been able to identify and remedy earlier in the design phase.

Regardless of whether this was a failure of the W3C and/or FIDO Alliance to enlist the aid of cryptography engineers, or of the cryptography community to be more proactive in preventing the deployment of error-prone cryptographic designs, there is only one path forward; and that is to fix the design of WebAuthn before it's set in stone.

Since this blog post was referenced in a ZDNet article about WebAuthn and ECDAA, it's made the rounds on social media and some people have been exaggerating its contents. We suspect this was because of a lack of clarity on our part, and wish to preemptively remedy this going forward:

What follows isn't a list of critical, game over vulnerabilities in WebAuthn. Rather, this is a list of design grievances that, in similar protocols, have led to security disasters over the years.

If you were already doing so, you should still use WebAuthn.

Our purpose in publishing this document was to have a publicly accessible resource that can be easily referenced in our ongoing discussions with the FIDO Alliance and their member organizations without having to dig through email threads that might not have been consistently forwarded or carbon copied.

A lot of our criticism is easily remedied by updating the relevant documentation to clarify and/or provide a justification for specific design decisions.

For example, until August of this year, point compression was covered by a non-expired patent, so the FIDO Alliance didn't consider it an option in earlier designs. However, they failed to make it explicit in their specification that point validation should be mandatory. (Instead, this is spelled out in their compliance/policy documents. The FIDO Alliance's security secretariat agreed that this should be made clearer in the specifications themselves.) While we stand by point compression being a significantly more robust design than expecting implementors to validate points (and not telling them about this requirement until it's time to get certified), the FIDO Alliance and W3C can remedy this by updating the specification documentation to make it mandatory. No change is absolutely necessary, although it would certainly be an improvement.

The call to action was intended for implementors, not users:

WebAuthn and ECDAA are not doomed. Don't throw away your hardware tokens, revert your codebases to use SMS or TOTP, or any other such drastic measures.

The remainder of this article continues below, unedited.

In the COSE Algorithm Registrations section of the WebAuthn specification, it notes that RSASSA-PKCS1-v1_5 is already registered by COSE and then registers two additional COSE algorithm identifiers for use in WebAuthn, based on the FIDO Alliance's ECDAA algorithm.

As a consequence of its COSE legacy, WebAuthn specifically requires ongoing support for RSA with PKCS1v1.5 padding. Much has been written about the past twenty years of padding oracle and signature forgery vulnerabilities inherent to PKCS1v1.5 padding.

If you're not familiar with RSA with PKCS1v1.5 padding, just know that a team of researchers won a prestigious information security award at the Black Hat conference this year for discovering that systems are still vulnerable to decades-old vulnerabilities simply because they still support RSA PKCS1v1.5 padding.

As we covered in a previous blog post, it is possible to implement PKCS1v1.5 securely, but this requires an application-layer mitigation; your library can't do it for you.

If you didn't explicitly write your RSA-based protocol to side-step these PKCS1v1.5 vulnerabilities (and, instead, you just used whatever API your version of OpenSSL and/or programming language gave you), you're probably vulnerable! (Unless you don't use this padding mode, of course.)

So while support for RSA with PKCS1v1.5 padding is explicitly required in the FIDO2 server requirements, we implore nobody to ever actually allow this padding mode to be used.

In short: PKCS1v1.5 is bad. The exploits are almost old enough to legally drink alcohol in the United States. Don't use it!

Fortunately, WebAuthn only uses RSA for signatures, so the relevant exploits are much easier to work around. You're still much safer not using RSA at all, or if you must, only using RSASSA-PSS.

To fully appreciate the security concerns with the FIDO Alliance's ECDAA specification, it's worth skimming over the past two decades of research into elliptic curve cryptography.

Cryptographers argued for a while about who to blame for this ECDSA failure, then Thomas Pornin published RFC 6797: Deterministic (EC)DSA in 2013 to prevent k-value reuse in ECDSA implementations (without breaking backwards compatibility). However, cryptographers arguing about the ECDSA failure wasn't a fruitless effort.

In 2013, Daniel J. Bernstein and Tanja Lange published SafeCurves, a website that evaluated a lot of popular elliptic curve designs on very rigorous criteria: It isn't sufficient for an elliptic curve cryptography algorithm to be secure against ECDLP attacks, there are a lot more requirements for making these algorithms secure in real world ECC. SafeCurves takes these requirements into account.

These RFCs were the result of years of bikeshedding over the subtleties of elliptic curve designs and parameter choices: Weierstrass vs Montgomery vs Edwards curves, cofactors, twists, the tradeoffs of 1 mod 4 versus 3 mod 4, etc.

CFRG discussions are very intense, deeply technical, and at many points heated.

At some point the mounting tension in the CFRG was briefly broken by someone vigorously demanding feedback for their homemade cipher "Crystalline", to which renowned security expert and nocoiner Tony Arcieri eventually obliged.

Out of all the hard-won ECC security lessons one could glean from the past two decades of real world security failures, ECDAA seems to have learned precisely none of them.

There are two schools of thought for preventing Invalid Curve Attacks:

Point compression means sending only the X or Y coordinate, and the sign (positive or negative) of the other coordinate. 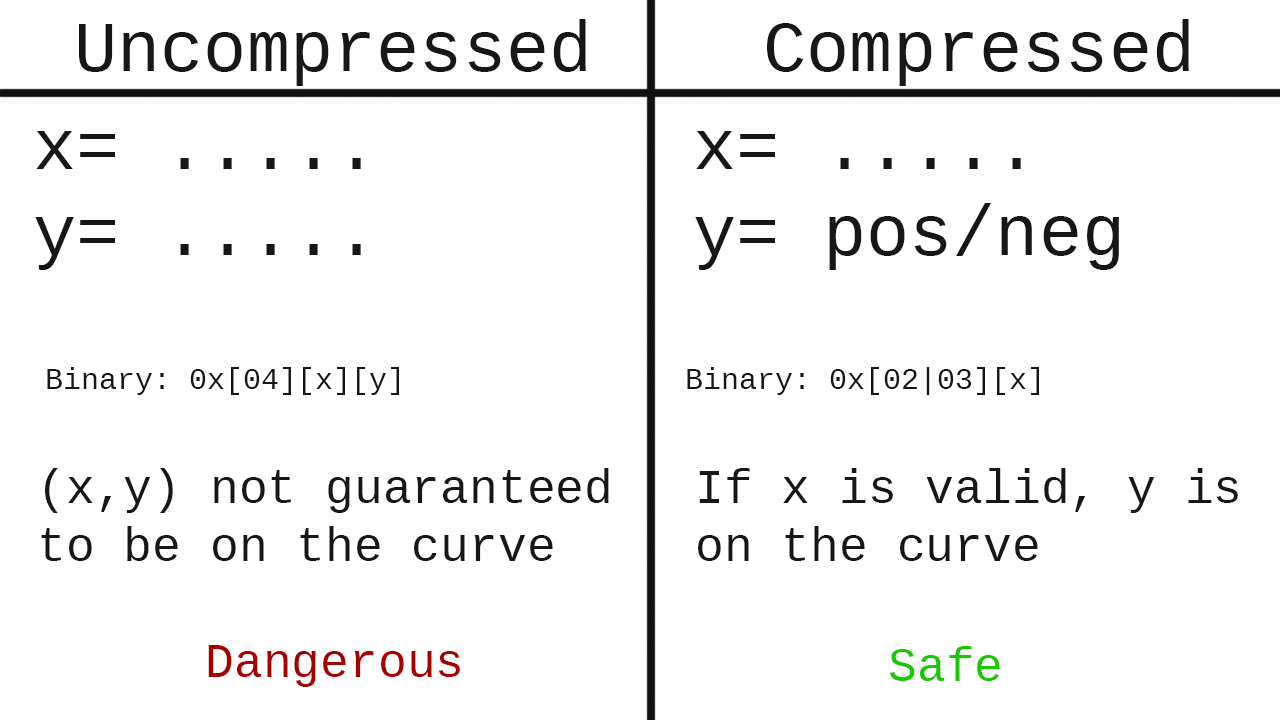 Point compression is widely regarded among cryptographers and cryptography engineers as the preferred mitigation strategy for preventing invalid curve attacks.

ECDAA explicitly specifies using uncompressed points (ECDAA specification, section 3.1.2 and WebAuthn, section 8.6), which allows an attacker to choose an (x,y) pair that isn't on the curve.

Point compression, by contrast, is not allowed per the current ECDAA specification; nor is it mentioned anywhere.

As we saw in the history of real world ECC security section of this post, randomly generated k-values have historically led to security disaster (i.e. revealing the secret keys for the ECDSA signatures that helped secure the PlayStation 3). The correct way to use ECDSA is with deterministic signatures.

Further, it is worth noting that the ECDAA specification's definition of $RAND(x)$ does not include any cryptographic security requirements. It is incredibly likely that developers would implement this using a Linear Congruent Generator or Mersenne Twister, rather than the kernel's CSPRNG.

Therefore, it is very likely that continuing to rely on randomness in ECDAA signing will lead to more ECC security disasters.

ECDAA in WebAuthn is Specified over Barreto-Naehrig (BN) Curves

WebAuthn specifies two ECDSA algorithms: ED256 (TPM_ECC_BN_P256 with SHA256) and ED512 (ECC_BN_ISOP512 with SHA512). These are both Barreto-Naehrig curves used for pairing-based cryptography, and suffer from a pretty serious security reduction.

Generally, if you have an elliptic curve with a prime of magnitude $2^{n}$, you have roughly $\frac{n}{2}$ bits of security against the Elliptic Curve Discrete Logarithm Problem (ECDLP). Therefore:

However, due to advancements in cryptanalysis, 256-bit BN curves "no longer offer 128 bits of security, but perhaps closer to 96 or so". This is a speedup factor of 32 bits (roughly 4 billion).

The ill consequences of this curve choice are exacerbated by several ECC security deficits inherent to BN curves. 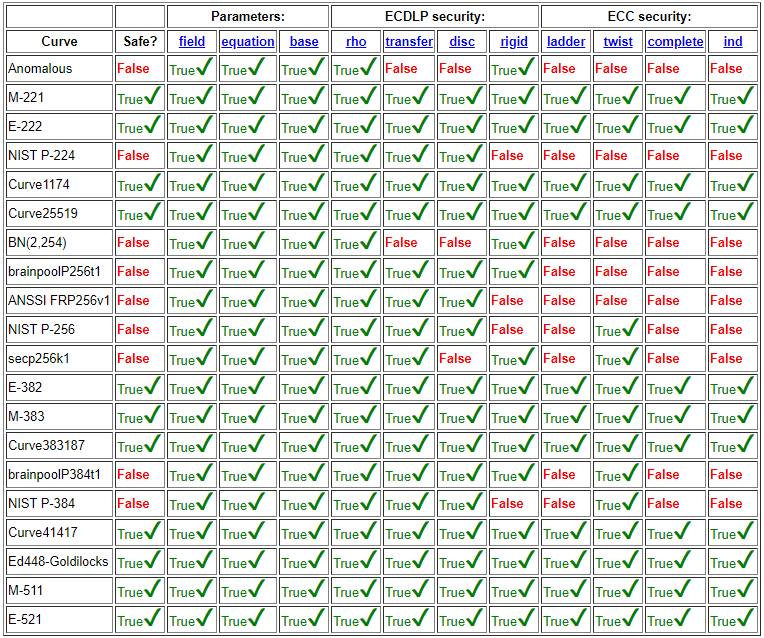 The FIDO Alliance Rolled Their Own Crypto

To round off the list of takeaways that ECDAA failed to take into consideration, the FIDO Alliance designed their own cryptography standard for anonymous attestations (using pairing-based cryptography over elliptic curves).

That puts us at 0 for 4 on learning from history so we're not doomed to repeat it.

In an interesting twist of fate, according to someone familiar with ECDAA and the FIDO Alliance, they hadn't yet implemented ECDAA themselves (mirrored).

While this is really weird to hear (why would anyone attempt to standardize a cryptography protocol they hadn't implemented, let alone tested, yet?), it does present to us an opportunity to fix the standard before it's burdened by backward compatibility requirements and we end up with an echo of POODLE.

Developers: Please, do NOT implement ECDAA in your WebAuthn libraries.

At least, not yet.

It might sound like a tremendous amount of work to shore up the security of ECDAA but two of the three proposed fixes are very simple.

This recommendation should be obvious at this point. Read about point compression above, if you haven't already done so.

With point compression, you'll be eliminating an entire class of active attacks and preventing a long tail of implementation error.

There are two (good, but different) approaches to ensuring deterministic signatures:

For example, there are two points in EcdaaSign that random values are being generated.

(The constants 0xF1 and 0xD0 were chosen as a visual nod to the FIDO Alliance when represented in hexadecimal.)

The motivation to use a domain-separated hash function instead of HKDF or HMAC is that ECDAA is going to be implemented in hardware, and since a hash function is already being used, the overhead for this change is minimal.

In light of the BN curve security reduction mentioned previously, an alternative curve for pairing-based cryptography should be considered.

When we shared our initial criticism of ECDAA with the FIDO Alliance, we CC'd Tony Arcieri (mentioned in the history section above) and he suggested looking at BLS12-381 ("JubJub") as an alternative to BN_P256.

Fix #4: Hire Cryptographers to Review Your Designs and Implementations

While not everyone who works with cryptography is on board, there is a large community of computer security experts and cryptographers that prioritize solutions over blame, and that wants to see projects like W3C's WebAuthn succeed.

If anyone wants to design a novel cryptography standard, reach out to cryptography experts. The CFRG is probably not the worst place to find one.

If yours is a commercial product, contract or hire at least one cryptographer to review your design and suggest changes, then implement them.

That being said, it cannot be the case that an alliance consisting of large companies and hardware security token vendors that advocates for improved web security fails to learn from the past two decades of real world cryptographic security research. Nobody wins in this scenario, except the attackers.